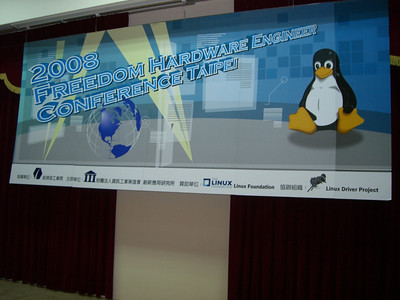 FreedomHEC Taipei is a conference where hardware engineers are invited to learn how easy it is to make their hardware work with Linux. This was the first year for the event and it took place on November 20-21, 2008 in Taipei, Taiwan.  Support from the Linux Foundation and the Institute for Information Industry made the event possible.

The event was attended by 165 people representing 41 companies. Speakers covered a large range of topics including X.org graphics drivers, input devices, and how to work with the Kernel community. Next year I hope we can involve more local speakers, provide translators and offer tutorial sessions.

It was a great experience organizing this years event and I would like to give a hearty thanks to everyone involved. I look forward to helping improve the event next year if everyone is interested :D

How and why to work with the Kernel community - Harald Welte: Solid overview of the how and whys. A session like this should be given every year.

Introduction to git - Junio C Hamano: Learned about git stash and enjoyed the visual metaphors used in the presentation. Great approach for presenting what can be a difficult to understand topic. Linux graphics driver development model - Eric Anholt: Overview of the present and future of Xorg architecture. Surprised that the audience had no questions as this topics was requested by several people. Perhaps translations would have helped? Ask Eric if a tutorial format might be able to show people how easy some of this stuff is: since he was insisting it really is ;)

File System Performance Tuning for Gdium - Coly Li: Talk was given in Mandarin but it triggered a number of questions. Note for next year: talks don’t need to be just about drivers to be relevant. ACPI EC driver - Alexey Starikovskiy: Alexey had the chance to meet with several people to talk about ACPI issues in their hardware. He seemed very happy with this result but missed out on meeting someone from Acer.

Eee Peripheral Interoperability - Ellis Wang: EeePC trying a strategy of getting a closed driver from vendors then opening a driver later. We talked at length why this process can be painful and doesn’t work for the community. Also pained to hear the EeePC OS uses a closed source Bluetooth stack instead of helping with BlueZ. Still confused on their requirement to get device specific printer tools working.

DMP x86 Soc Family - Anthony: Fixed their patches for their IDE driver to use proper QUIRKS so the hardware should work under the next vanilla Kernel release.

Andes Open Development Environment For Linux - Shawn: A new SoC with a new $ARCH. Planning to merge in the next 6 months the GCC, Kernel and QEMU changes.  Harald tried to convince them to merge now- or at least get an RFC out there so upstream can be prepared for the changes.

The experience of touch pad driver and application development - Garylee: Given in Mandarin but the slides showed that he had a good understanding of all of the moving parts in the Linux input system. Linux Multiqueue Network Driver Infrastructure - Herbert Xu: Didn’t watch this one- talking with EeePC guys.